Many customers looking for modified shipping container rentals often have special requirements to create a unique space that’s not only flexible, portable, and secure, but also tailored for a specific usage case.

For engineering projects, customizing any size of shipping container is often the most cost-effective way to create a mobile workshop that suits your specific application. “Texas” is one of our most recent joint projects customized to suit the needs of Waterloo Rocketry, a local student design team at the University of Waterloo.

Sigma delivered a shipping container for Waterloo Rocketry that would be used for static fire testing of their rocket engines. The container was then further modified by students on-site to better suit testing conditions, including the installation of steel tread flooring.

This is one of those projects that our team is proud to feature as it showcases the versatility of a standard container. It was transformed into an ideal working space with all the essential features to deliver a high safety standard for testing larger rockets. We applaud the students at Waterloo Rocketry for their ingenuity and creativity throughout this process.

This wonderfully custom container was given the pet name “Texas” because of the large “tex” on the side. Further modification plans by Waterloo Rocketry are temporarily paused due to the COVID-19 situation. The remaining tasks include custom painting the container, adding mounts for fuel plumbing, and anchoring the container to the ground.

Waterloo Rocketry put Texas in a field — quite some distance away from buildings — that the University designated for the test setup. The Waterloo Rocketry team has so far benefited from this cost-effective, versatile, and portable workshop; they stated: “It has provided us with excellent protection during tests of potentially explosive rocket engines.”

Here are some images of Texas on-site: 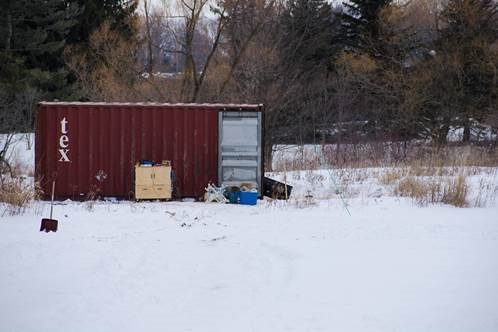 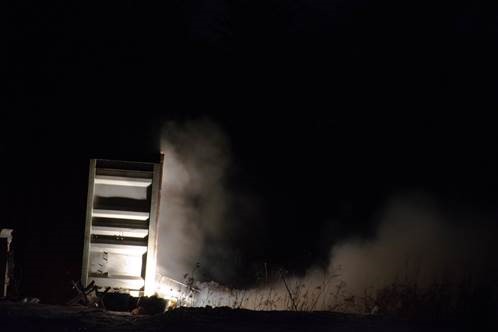 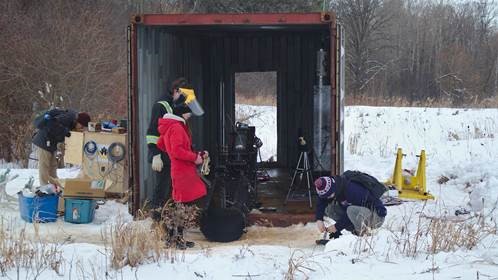 Every task undertaken in the container modification process requires great precision, especially concerning oils and fuel handling. They pose a threat to the environment in the event of spills or leaks. The consequences can be dire if a fuel spill makes its way into the ground, groundwater, or surface water.

At Sigma, we take environmental sustainability seriously. Our fuel storage containers are fabricated with careful attention to Oil Storage Regulations, which included preparing a permanent storage and refuelling area that won’t be moved for the entire duration of the project. Our strong, weatherproof shipping containers can be partially or wholly converted into COSHH stores with removable floors, built-in taps, varying venting systems for optimal ventilation, and drip trays to hold possible spillage of your fuel and lubricants in storage.

Waterloo Rocketry is a student design team whose primary goal is to design and build sounding rockets to teach students engineering skills.

The engineering students are testing new engine designs that are their most complex to-date. The team hopes to eventually build a liquid engine that will fly scientific payloads up to a height of 30,000 feet and plans on performing numerous engine test fires to achieve that goal. For student design teams like Waterloo Rocketry, Sigma wholly supports them in their ambitions and wishes them the best in all their future endeavours.

The Future of Small Rockets

There’s growing interest in small rockets, with many venture capitalists investing in startups exploring this niche. In fact, some companies have already launched their small rockets into space.

The demand for smaller rockets is attributed to advances in computer chips and technology, which has led to shrinking satellites. With a smaller satellite, you can now perform the same function as the massive predecessors.

The shift from huge rockets to smaller rockets that have the same capabilities will revolutionize the market. It will become increasingly affordable for companies to launch satellites to observe the earth and explore other opportunities, such as space-based internet systems.

Though smaller satellites have been around for a while, their launch was previously tied to larger satellites launched with rockets. This was cheaper but inconvenient, as any delays in the rocket launch delayed multiple projects.

This “bulk launching” often worked out cheaper per gram, as larger a Falcon Heavy could lift 300 times the mass carried by Rocket Lab Electron for $90 million, compared to $5 million for the latter. You get more value for money by using a bigger rocket; however, smaller rockets offer convenience and independence, allowing you to work on your schedule.

Shipping Containers Can Be Rocket Science

With a shipping container as their engine test site, teams like Waterloo Rocketry can test rockets from almost any place they set up.

As experts in shipping container modifications, we often help our clients find suitable locations to place their units, depending on the purpose. For workshop containers like Texas, they need to be placed on impermeable surfaces with well-controlled drainage, and at a good distance from grids, water sewers, watercourses, or channels to avoid contamination and pollution.

To learn more about how Waterloo Rocketry uses custom shipping containers to test rockets, call Sigma Containers at 416-366-7762 or contact us here.

Tom Bray is a freelance writer with over five years experience writing for online publications and over ten years in business and sales. He studied journalism and media and has written for various online outlets on multiple topics. His specialty subjects are shipping containers and transport logistics.

Tom’s passion for writing and transport logistics motivates him to provide frequent direct marketing content that can show you how a shipping container can be effectively utilized and modified to each person’s needs.

You can connect with Tom via email at info@sigmacontainer.ca.